Becoming an F1 engineer is definitely not an easy dream to pursue. Only a handful of very talented people have that opportunity and only a small number of them experience the joy of winning titles. In such an incredibly competitive sport like Formula 1, Dr. Werner Holly is one of the people who experienced that feeling of becoming a World Champion with his team, while currently he is working in the numerical combustion development of 4, 6 and 8 cylinder engines at Daimler AG. We are proud to bring you his story in the fourth part of our blog series „Living the Dream.“

How it all started

Born in 1987 near Vienna, Werner has shown interest in engines at a very early age. During one of his stays at grandmother’s place, he found a motorized chainsaw in her garage and was instantly amazed by it. He started disassembling the casing so he could have a closer look into the working of the engine inside it. Werner says it was that particular moment that has really sparked (no pun intended) his fascination with combustion engines.

Formula 1 has also been an important part of his life since he was a young boy. Just like our previous guest Petr Paliza, the season of 1997 was the first one Werner watched closely and the one that started his everlasting passion for racing.

With all the aforementioned affiliation towards technology, it was no surprise that already in highschool Werner decided to take steps towards an engineering career by opting the technically oriented courses.

Finishing that school, he already acquired some knowledge about material science, mechanics and engines so he made a decision to immediately start working in the industry. However, soon it turned out that some of the work places he wanted to apply to (like Bmw Steyr) required a University Degree. Enrolling at the Vienna University of Technology enabled Werner to broaden his knowledge about mechanical engineering and opened up many more opportunities for him, later in life. 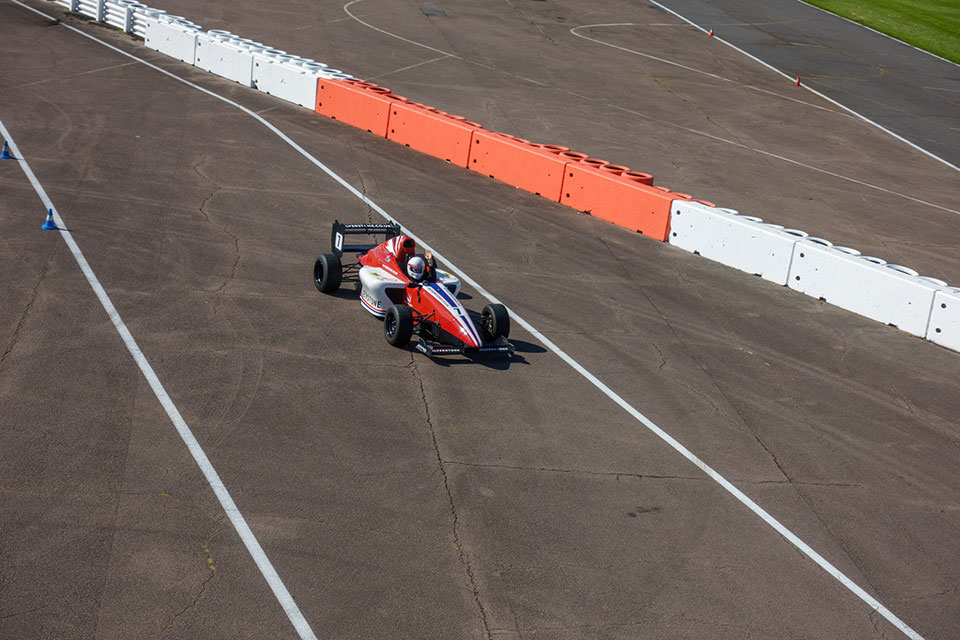 From the end of 2009 to the end of 2010, Werner has been a team member of his university’s Formula Student team. He worked in the engine department, specifically on the exhaust system. His task was to design an exhaust system made of composite materials which he and his team did in collaboration with Schiebel Gmbh. Reflecting on those days, Werner says that the knowledge he had during those days was shallow, but the experience in FS helped him a lot to figure out which skills he had to work on in order to have a better understanding about the thermodynamics and flow within the engine.

Unfortunately, the team did not manage to build the car on time for the events, but the experience Werner got during his time with the team encouraged him to choose a Bachelor Thesis offered in the university department related to automotive engineering. There he had his first contact with 1-D CFD analysis which was very important for his development as an engineer.

An important step in Werner’s professional career was when he was admitted to a 6-month internship at Porsche Engineering under the Erasmus+ programme. With the passion he had for motosport, he was delighted to get the opportunity to work on the 919 Hybrid project. Besides the 919 Hybrid, he also worked on road cars such as Porsche 918 Spyder and the 911 Turbo. Speaking about internship, he really emphasized the benefits he got from it because he got the chance to do some serious simulation work in 3D-CFD programs. This was his first time in a professional environment and he says that every young student should try to get that experience as soon as possible.

Following the internship, Werner finished his Master study and focused on 3D-CFD simulations, large eddy simulations, reaction kinetics and generally combustion in large engines in his Master Thesis. Opportunity to expand his research came in the form of PhD work at his university and he took it. During the PhD research, he became an expert in the field of engine combustion and has published several highly rated scientific papers which definitely made him interesting for certain Formula 1 teams.

When he stumbled upon a job offer from Mercedes’ HPP (High Performance Powertrains) Werner applied to it and even though his qualifications were impressive, he was still very pleasantly surprised when he was invited for an interview in the team’s engine headquarters at Brixworth, UK. An amusing anecdote he told us is that the preparation for the most important interview of his life included binge-watching the old episodes of Top Gear in order to improve his English. People at Mercedes were impressed with his findings because they were focused on the improvement of the engines thermal efficiency, an area that has become crucial since the hybrid era of Formula 1 began in 2014.

The surreal idea of becoming a part of a reigning Formula 1 world champion team has soon became a reality for Werner as he was appointed as an performance simulation engineer. Adapting to a new workplace was not easy but the dynamic and motivated environment were well suited for his character. He was able to greatly contribute to the Mercedes-AMG F1 team in years 2015 and 2016 when the team dominantly won both the Constructors’ and Drivers’ Championship. 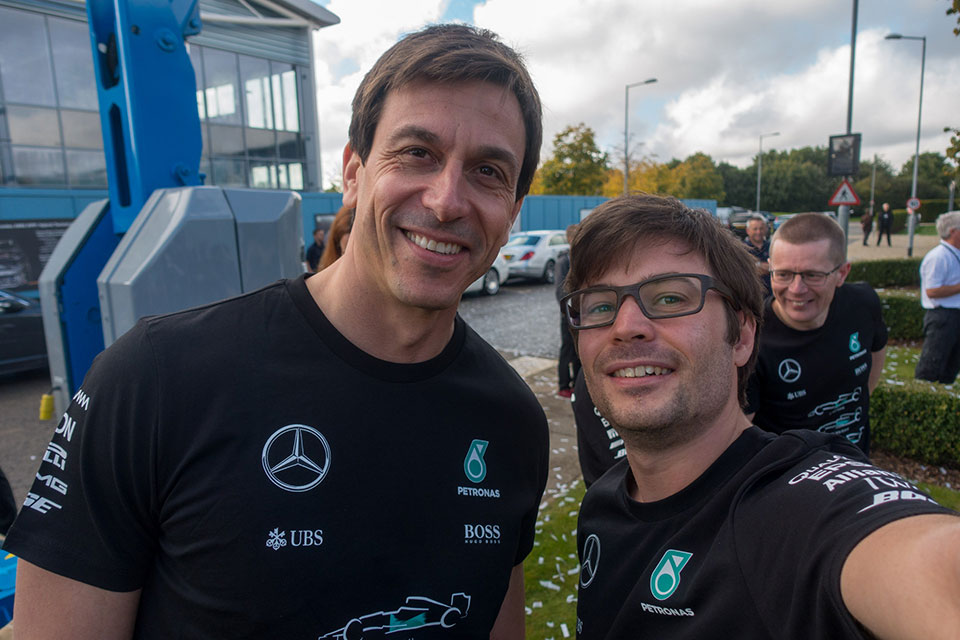 What does it take to win

Technical knowledge and expertise are always important factors for success, but the mentality is something that sets apart a regular engineer and an engineer that delivers the best possible results week after week. Something that was very helpful for Werner was his own mindset that is also reflected in his company’s motto: „The Best or Nothing.“ The passion he has been carrying with himself since young age, determination and work ethics combined with the engineering talent was the winning recipe and the reason he fit in so well with the Mercedes-AMG team. 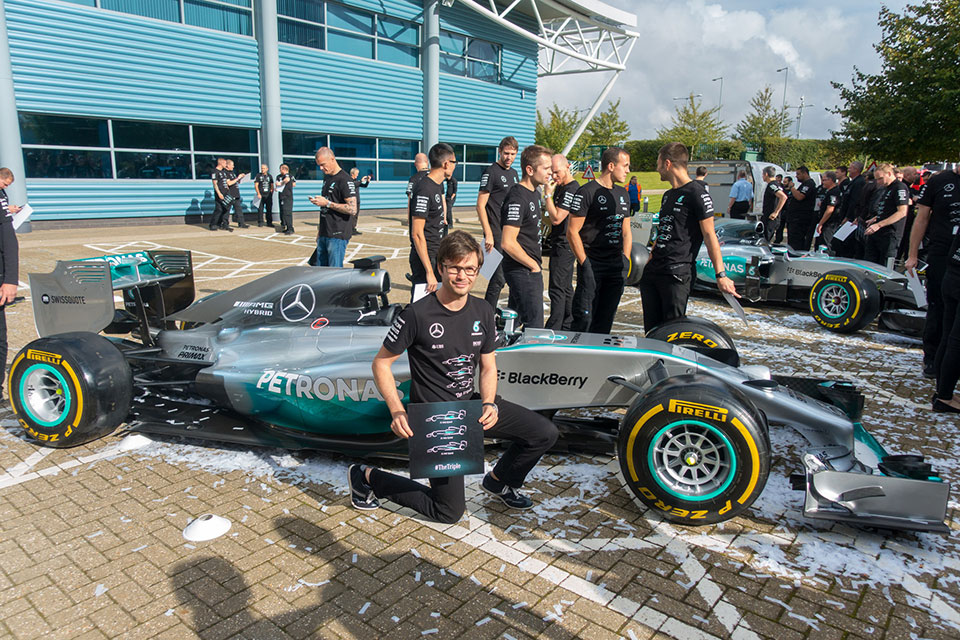 Final Words and Advice for the Students

A person can learn a lot by talking to such a high-profile expert like Dr. Werner Holly. He is someone whose passion, motivation and hard work brought him to the absolute top of the most prestigious motorsport in the world and hopefully his story can serve as a motivation for others who aspire to follow their dream, whatever that is. His advice is to always be ready for the opportunities that may come up in life and to have the passion and love for anything that is done in life. The most important thing is not to be lazy and that one should always aspire to be a better version of himself every day!*

* Disclaimer: Mr. Holly shared his personal experiences voluntarily and spoke as a private person, not representing his company in any extent