For many of us, working in one of the top branches of motorsport represents the ultimate goal and it is the dream that keeps us going and working hard in order to achieve it. That is why in this part of our blog we bring you the story of a former member of the Formula Student community who managed to turn his dream into reality and became a part of an elite racing team.

His name is Vincenzo Scali and he is a 32-year-old performance engineer at the TAG Heuer Porsche Formula E team. Born in Rome, Italy, he acquired a passion for racing at an early age by watching Formula 1 races with his father. It was that passion that influenced him to pursue an engineering career and the starting point for that was when he enrolled one of the most prestigious technical universities in Europe – Politecnico di Milano.

During the second year of his studies, Vincenzo decided to become a part of the Formula Student team of his University, the Dynamis PRC. Although being a part of the FS team almost during the entire college, it was his Master Thesis about the development of a mathematical model for high performance racing tyres he was doing in collaboration with Pirelli F1 that shaped his career path in motorsport engineering.

The first role he had in the team was working on the electrical wiring of the car, specifically the design and construction of the lump cables which he found very interesting despite being a lot of work. As time went by, the FS project responsibilities became larger and it was difficult to successfully manage both the exams and FS work. When he became the team leader, he even had to postpone the exams for a whole year because of the amount of time invested in the FS project.

Asked about his favourite memories from his FS days, Vincenzo had no hesitation in saying that sleepless nights in the garage were something he will always remember because at that time, the Dynamis PRC consisted of a small number of people working with limited resources and they were struggling to even finish a race. Results they had were a product of their hard work and desire to make the most out of the tools they had. One time he even went straight to an exam after a whole night spent in the garage which really speaks a lot about the will power required to succeed. Another memory he is very fond of was the competition in Varano de ‘Melegari, saying that the atmosphere there was really fantastic with amazing people from all over the world.

Being a team leader means being available to the team all the time and having a complete overview of the project can be quite a handful. Learning how to manage time and people and developing good communication skills was crucial for his further professional career progression.

However, the most valuable knowledge Vincenzo gained throughout his Formula Student years is the importance of dealing with the regulations. „Reading the rulebook of any competition is the first thing to do when you take part in it“, he says. To understand the rules in detail and being able to exploit the maximum out of them thus became his guidelines in professional life. 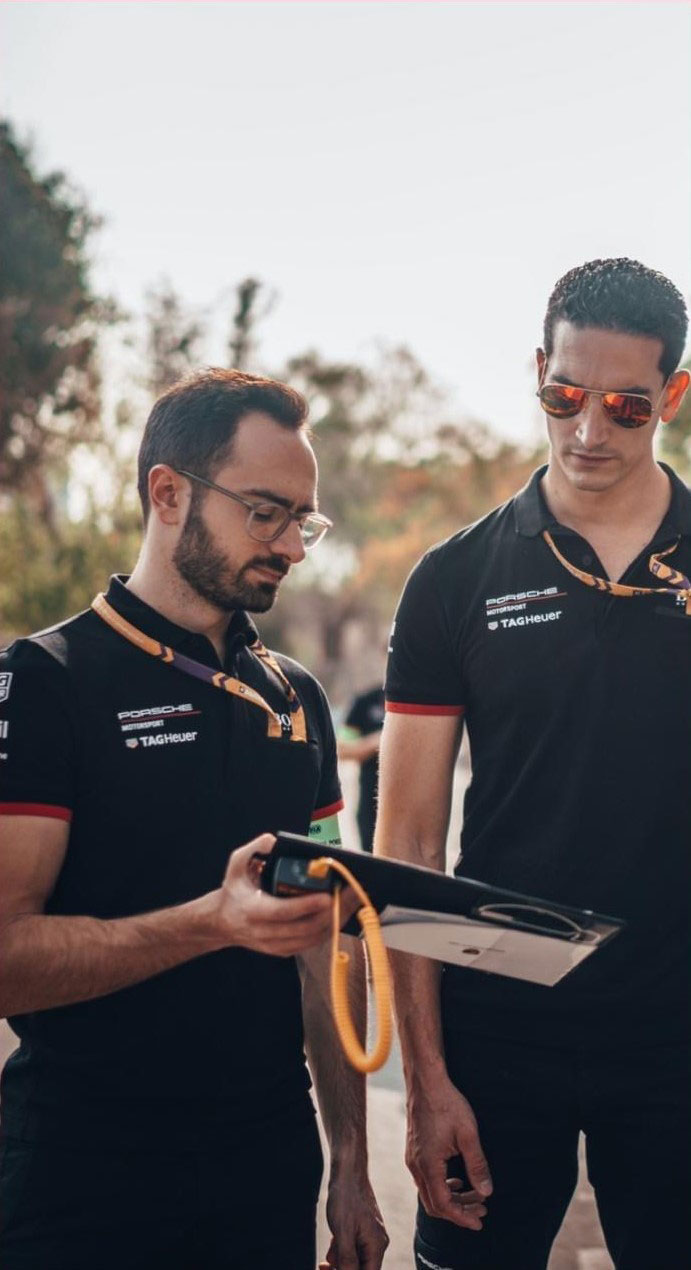 Upon graduating from college, Vincenzo applied for a job at the Red Bull Racing F1 Team but was denied because at the time they were not looking for new people. After that, he learned about Porsche Motorsport looking for someone with his competencies so he got the job and started working on Porsche’s LMP1 project in the World Endurance Championship. He enjoyed quite a success with the team having won the WEC championship in 2015, 2016 and 2017 with the team, the highlight of that period being Porsche’s overall victory at 2017 24h of Le Mans against the almighty Toyota Gazoo Racing.

When asked to compare the stress levels on such a high profile workplace with those he experienced during college, he concluded that they are quite similar with the main difference being in the magnitude of the consequences of the mistakes made.

When Porsche decided to pull out from the WEC championship, he was allocated to Porsche Motorsport’s newly formed Formula E team. His position? Performance Engineer. His task is to communicate with the drivers and understand their feedback about the car’s drivability, properties, what is good and what is bad and then transfer those remarks to the technicians so they can do the neccessary tweaks to the car in order to improve what needs to be improved. Simply put, Vincenzo translates drivers’ feedback to an engineering language.

There are some differences in the work that is being done during the season and in the off-season. When the teams are preparing for the following season, they do a lot of R&D and testing so they can fully understand the car and its potential. That requires a lot of data analysis and attention to detail because it is very important to build up as much knowledge as possible before the season starts.

Once the season starts and the cars are racing on a weekly basis all over the world, every operation must go smoothly and, favourably, with no mistakes. There is no more time for fine-tuning and extensive investigations, but rather a more pragmatical approach is needed and quick thinking in the heat of the moment.

He points out the difference between the people who work track-side and those who stay in the factory all the time: the former group focuses on the ongoing season, while the later constantly works on the development for the next season.

In the team’s first Formula E race ever, Andre Lotterer surprisingly claimed the podium after finishing second, something which Vincenzo regards as his favourite memory with this team. That is, of course, until they win the Formula E Championship!

Advice for the Students and Future Engineers

In the end of this pleasant and very informative conversation, Mr. Scali offered some valuable advice to the perspective students who have the ambition to follow his footsteps and find themselves at one of the most exciting workplaces in the world: „Take care of your relationships!“ By that, he emphasises the importance of networking and communication skills. Of course, technical background and knowledge in the relevant field of work are important, but one must take care of his social skills and be persuasive and clear when communicating with others in order to be successful when the professional career begins.

* Disclaimer: Mr. Scali shared his personal experiences voluntarily and spoke as a private person, not representing his company in any extent.